I had the opportunity of visiting Sevagram on the outskirts of Wardha during one of the “store visits” last week.I was not only impressed but inspired by the simple message which Mahatma Gandhi gave to all of us by way of his living.I was left with an impression that while a lot of other leaders just “talk” Gandhiji “did” and that is why there are and there will be no parallels to him in times to come.

To share a brief history,in 1933 Gandhiji donated his ashram at Sabarmati to Harijan Sevak Sangh and moved to a village named Shegaon near Wardha which he renamed as Sevagram or the “Village of service” at that time it had just 1000 residents and the lad for the ashram was donated by Seth Jamnalal Bajaj who a great disciple of Mahatma.

Gandhiji had chosen Wardha essentially because it was at the center of India.Initially he built a kuti or hut for himself and another one for Ba.Later on his secretary Mahadev Desai and other moved in.

The key take aways for me after the visit to the ashram were :

We had ordered for a ‘thali’ at the cafeteria which serves home cooked organic food and as the food was tasty we asked for refills which we were denied.Later I learnt that Gandhiji believed that food has to be taken with a belief that it is a medicine which will help my body to get strength and fight diseases so it has to be taken in an amount which justifies this belief – hogging is just not allowed.

I tried o keep my “alpaahar vow” for a couple of days but could not keep up.The good news is that my habit of watching what I eat has got more resolve.

Another aspect of the ashram that was striking was its simplicity.Today we live in a world that is full of sights and sounds.In fact if you look around you will find that most of us are afraid of being alone with themselves.We need someone or something constantly picking our senses whether its TV,radio,Ipod,cellphone,newspaper or something else.

We have just forgotten to relish our own company.Being by your own self is looked as a sign of going insane.

At the ashram There were none of the above distractions.Just a lot of good books to read and think about.

I had seen in the movie how Gandhiji has a fight with Ba and asks her  to leave the house if she was not ready to clean the toilet by herself.

At the ashram I learnt that each and every chore was performed by the inmates whether it was cooking or cleaning.Even during the free time they spun the yarn with the famous “wheel”.Even the day I visited I found several of the old disciples of Gandhiji silently spinning the wheel completely immersed in their own self and enjoying what they were doing.Just by looking at them I could see a still mind full of patience,completely at peace with itself.

Interesting bit – The name “Bapu” or father was given to Mahatma Gandhi by Mahadev Desai at Wardha ashram.Soon everyone started calling him the same.

Below are some pictures that would help you capture the experience : 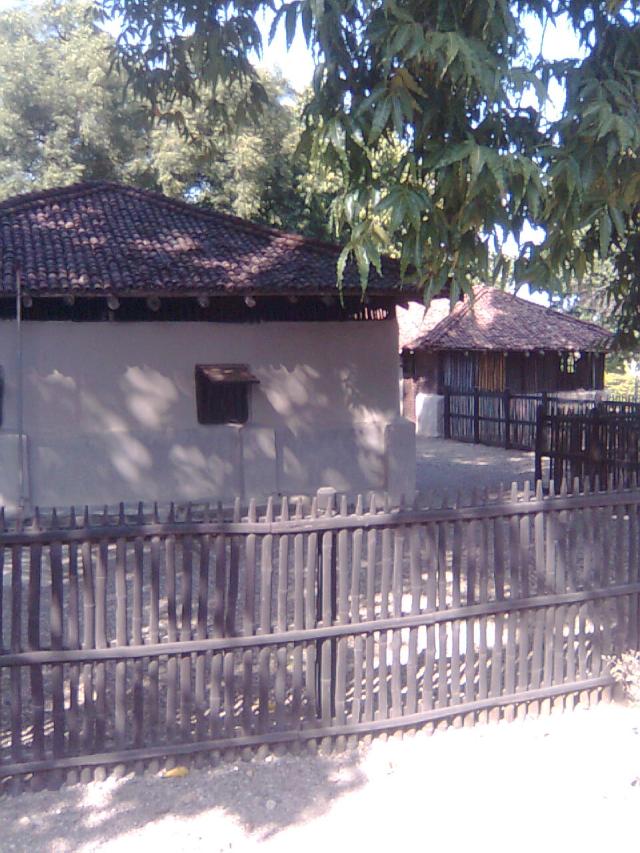 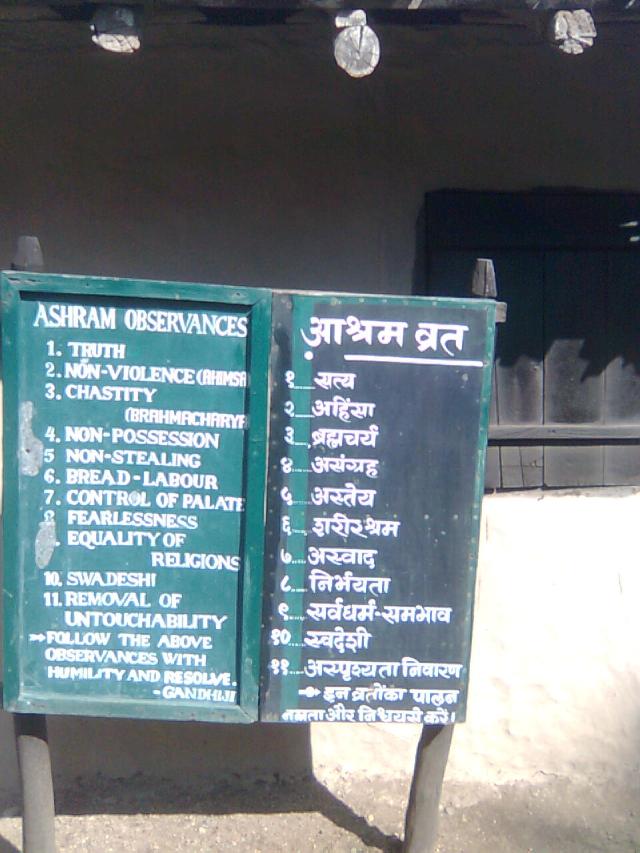 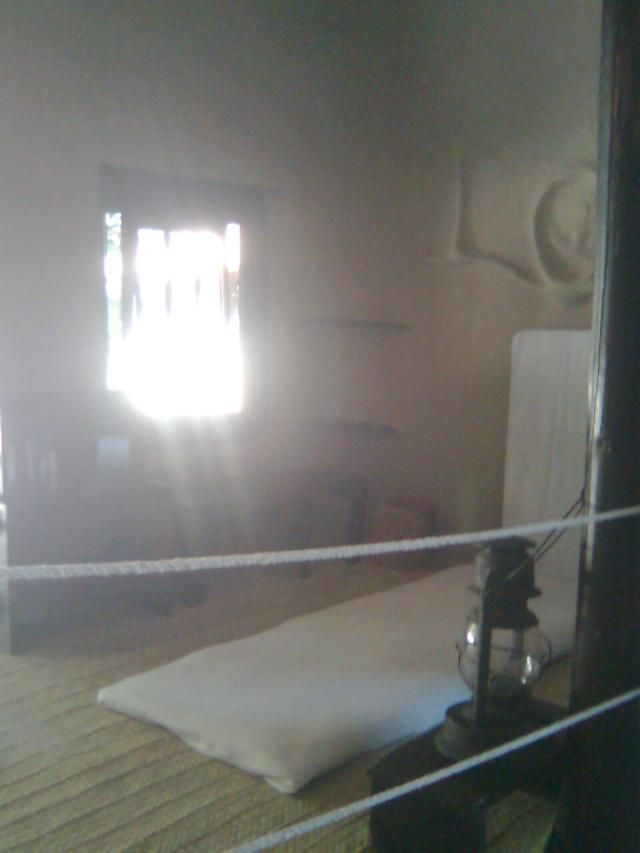 Gandhiji’s reading place.That is where he wrote most of letters and books.

In a recent interview when President Obama was asked that if he gets a chance to have lunch with one of the great personalities in history who would it be.Obama promptly said that “it would be Mahatma Gandhi for sure”.He added that no other leader has inspired him more or has managed to change the thought of mankind and influence it as much as Mahatma Gandhi.

I think he made the right choice.I would do the same….

Here’s an interesting article from Wall Street Journal refuting the Global Warming enthused Doom’s day scenario.Even if this is not completely correct,it makes more sense to me than those monkeys shouting ” Blah,Blah” from the TV screens.

Anyone who talks without facts and proof about the world coming to an end should be classified as a “terrorist” and be treated accordingly.

Suppose for a minute—which is about 59 seconds too long, but that’s for another column—that global warming poses an imminent threat to the survival of our species. Suppose, too, that the best solution involves a helium balloon, several miles of garden hose and a harmless stream of sulfur dioxide being pumped into the upper atmosphere, all at a cost of a single F-22 fighter jet. Good news, right? Maybe, but not if you’re Al Gore or one of his little helpers. The hose-in-the-sky approach to global warming is the brainchild of Intellectual Ventures, a Bellevue, Wash.-based firm founded by former Microsoft Chief Technology Officer Nathan Myhrvold. The basic idea is to engineer effects similar to those of the 1991 mega-eruption of Mt. Pinatubo in the Philippines, which spewed so much sulfuric ash into the stratosphere that it cooled the earth by about one degree Fahrenheit for a couple of years. Could it work? Mr. Myhrvold and his associates think it might, and they’re a smart bunch. Also smart are University of Chicago economist Steven Levitt and writer Stephen Dubner, whose delightful “SuperFreakonomics”—the sequel to their runaway 2005 bestseller “Freakonomics”—gives Myhrvold and Co. pride of place in their lengthy chapter on global warming. Not surprisingly, global warming fanatics are experiencing a Pinatubo-like eruption of their own. Mr. Gore, for instance, tells Messrs. Levitt and Dubner that the stratospheric sulfur solution is “nuts.” Former Clinton administration official Joe Romm, who edits the Climate Progress blog, accuses the authors of “[pushing] global cooling myths” and “sheer illogic.” The Union of Concerned Scientists faults the book for its “faulty statistics.” Never to be outdone, New York Times columnist Paul Krugman scores “SuperFreakonomics” for “grossly [misrepresenting] other peoples’ research, in both climate science and economics.” In fact, Messrs. Levitt and Dubner show every sign of being careful researchers, going so far as to send chapter drafts to their interviewees for comment prior to publication. Nor are they global warming “deniers,” insofar as they acknowledge that temperatures have risen by 1.3 degrees Fahrenheit over the past century. View Full Image Gloview Associated Press Gloview Gloview But when it comes to the religion of global warming—the First Commandment of which is Thou Shalt Not Call It A Religion—Messrs. Levitt and Dubner are grievous sinners. They point out that belching, flatulent cows are adding more greenhouse gases to the atmosphere than all SUVs combined. They note that sea levels will probably not rise much more than 18 inches by 2100, “less than the twice-daily tidal variation in most coastal locations.” They observe that “not only is carbon plainly not poisonous, but changes in carbon-dioxide levels don’t necessarily mirror human activity.” They quote Mr. Myhrvold as saying that Mr. Gore’s doomsday scenarios “don’t have any basis in physical reality in any reasonable time frame.” More subversively, they suggest that climatologists, like everyone else, respond to incentives in a way that shapes their conclusions. “The economic reality of research funding, rather than a disinterested and uncoordinated scientific consensus, leads the [climate] models to approximately match one another.” In other words, the herd-of-independent-minds phenomenon happens to scientists too and isn’t the sole province of painters, politicians and news anchors. But perhaps their biggest sin, which is also the central point of the chapter, is pointing out that seemingly insurmountable problems often have cheap and simple solutions. Hence world hunger was largely conquered not by a massive effort at population control, but by the development of new and sturdier strains of wheat and rice. Hence infection and mortality rates in hospitals declined dramatically as doctors began to appreciate the need to wash their hands. Hence, too, it may well be that global warming is best tackled with a variety of cheap fixes, if not by pumping SO2 into the stratosphere then perhaps by seeding more clouds over the ocean. Alternatively, as “SuperFreakonomics” suggests, we might be better off doing nothing until the state of technology can catch up to the scope of the problem. All these suggestions are, of course, horrifying to global warmists, who’d much prefer to spend in excess of a trillion dollars annually for the sake of reconceiving civilization as we know it, including not just what we drive or eat but how many children we have. And little wonder: As Newsweek’s Stefan Theil points out, “climate change is the greatest new public-spending project in decades.” Who, being a professional climatologist or EPA regulator, wouldn’t want a piece of that action? Part of the genius of Marxism, and a reason for its enduring appeal, is that it fed man’s neurotic fear of social catastrophe while providing an avenue for moral transcendence. It’s just the same with global warming, which is what makes the clear-eyed analysis in “SuperFreakonomics” so timely and important. (Now my sincere apologies to the authors for an endorsement that will surely give their critics another cartridge of ammunition.) Write to bstephens@wsj.com

There are Images I need to complete my own reality.

I go with it

I flow with it

My mind is numb

float in the air

Its a starry night

I shout at the sky

my words come back

the nothingness stares back at me

as my frustration mounts

Is there anybody out there ?

I am tired of living

I wish I could take my self away

look at it from outside

so it starts making sense

not too long ago